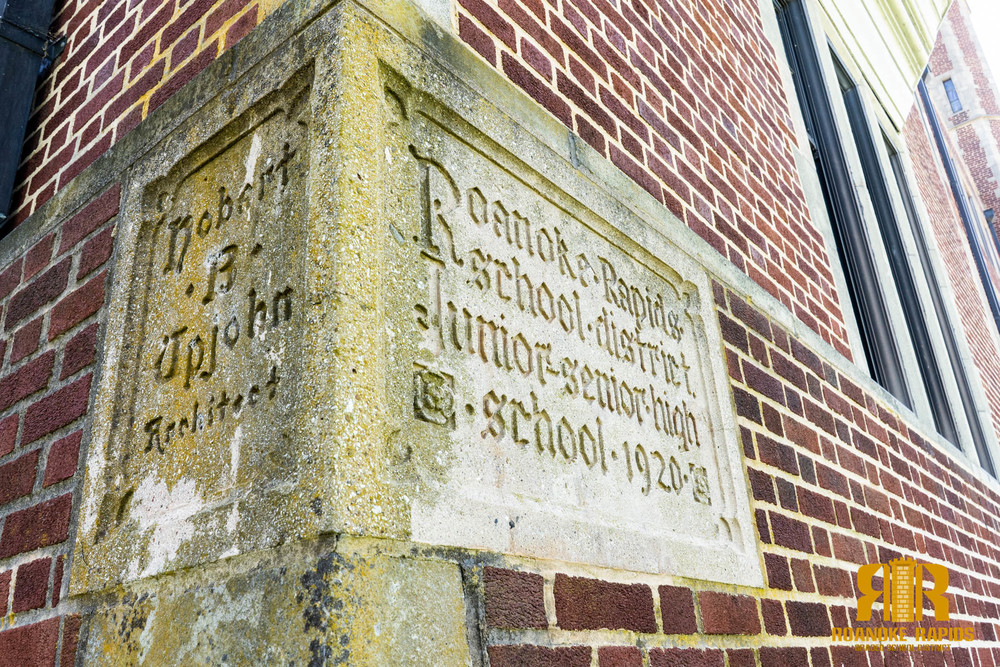 Roanoke Rapids High School announced its final plans to celebrate the 100th Anniversary of the historic senior building, October 1 & 2, 2021 including the opening of the 100 year old time capsule in the building’s cornerstone during the weekend celebration.

“We have numerous organizations working behind the scenes including the RRHS Alumni & Friends, RRHS Sports Club, RRHS band, chorus, and the City of Roanoke Rapids to make this event a success,” said Jeff White, Principal.

Events will begin September 24th with a city-wide treasure hunt.  A gold-colored dog tag necklace will be hidden in the Roanoke Rapids area as the treasure. The finder of the treasure wins $1000 from the Alumni & Friends Association. A riddle is provided in increments to help you find the necklace. The first clue of the riddle will be released Friday, Sept 24th at 8am. Additional clues of the riddle will be released incrementally on a schedule. The treasure is NOT on school property but is located on publicly accessible property. More information is available at:  www.rrhstreasure.com

The City of Roanoke Rapids Parks & Recreation Department and Visit Halifax are hosting a half marathon, 5K run, and 1 mile fun run/walk on Saturday, Sept 25th  Events will begin at the Roanoke Dam on the historic Roanoke Canal Trail.  Race Entry Form

“We are proud and excited to share in this centennial celebration as it provides us with an opportunity to come together as a community and reflect on the RRHS Junior-Senior Building as an architecturally significant hallmark of our city’s past, present, and future.  Through tremendous community support it has retained its charm and characteristics as it did 100-years ago,” said Kelly Traynam, Roanoke Rapids Interim City Manager.

The RRHS Centennial Weekend events will begin Friday Oct 1st, at 9 a.m. with the Alumni Association Golf Tournament at Chockoyotte Country Club.  This is a shotgun start event with an approximate cost of $280 per group of four individuals. More information is below or you can call 252-532-4150,  Golf Tournament Registration

The school will host a series of events for students on Friday, Oct 1 including the annual homecoming parade at 3:30 p.m. and the homecoming football game against Northern Nash at 6:30 p.m.  A centennial fireworks display is being planned following the game.

“We’re excited this year to also have many of our former homecoming queens to join us on the field that night for special recognition.  We’ve heard from many of them and hope to recognize these and other alumni in a special way during the homecoming halftime show, said Gary Edwards, RRHS Student Council Advisor.

On Saturday Oct 2, the festivities will begin with a parade at 10 a.m. to include classic cars and trucks representing every decade over the past 100 years, the RRHS band, and other community floats.  The parade will begin on Washington Street, move along Hamilton Street, and end in front of the high school with a ceremony.

One of the highlights of the weekend will be the 10 a.m. cornerstone opening and rededication ceremony. The contents of the time capsule, which was placed in the building’s cornerstone in 1920 as it was being constructed, will be revealed.  The Grand Lodge of North Carolina participated in the original dedication and has been asked to return to participate in retrieving items left in the time capsule.

“It doesn’t happen often,” said Phil Johnson, a grand steward with the state lodge, “but it’s a great opportunity for Masonry. Some of the items known to be contained in the time capsule include a 1920 penny, a Bible and Masonic items.  The Masons will also perform a rededication ritual which will include adding some additional items to the time capsule from current students before it is resealed.

“As an alumni, it is truly a once in a lifetime event to be able to witness this historic ritual with the rededication of the cornerstone. Our community thrives on local history, and seeing the copper box that was placed by Grand Master Dr. James C. Braswell 100 years ago, will be an honor in itself,” said Cindy Boone, RRHS Centennial committee member.

Following the ceremony, the school will host a festival with food trucks, local vendors, and tours of the historic building.  At 2 p.m. an alumni band concert will take place in the high school auditorium followed by an alumni chorus concert at 4 p.m.

The festivities will conclude with a gala hosted by the RRHS Alumni & Friends Association at the Kirkwood Adams Community Center from 7 to 11 p.m.  Anyone is allowed to attend this event with a ticket.

“We’re planning a huge celebration. This is an exciting time in the history of our community and school district.  The Alumni Association has been working tirelessly to  make this one of the biggest events this area has ever experienced,”  Phil Hux, Alumni Association President.  Tickets for the gala can be purchased online at: RRHS Centennial Gala Ticket Information or in person at the office of G.W. Hux Insurance in Roanoke Rapids.

Visit Halifax has arranged special room rates at local hotels for alumni and friends visiting from out of town for the upcoming 100th Celebration. Here's the link:  Special 100th Celebration Hotel Rates.